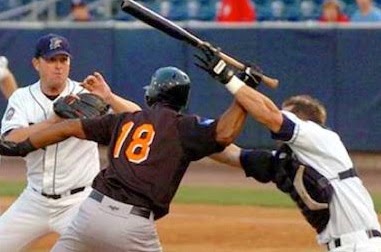 Jose Offerman was an infielder who played for 15 years in the Major Leagues, last playing for the Mets in 2005.  At his peak, Offerman signed a free agent deal with the Red Sox in 1998 that paid him $26 million over 4 years.  Although Offerman was an All-Star in 1999, his offensive production started to wane in 2000 and he was eventually traded away near the end of the Boston contract.  By 2006, Offerman was playing for the Mets’ AAA affiliate in Norfolk and, after hitting  just .238 in 97 games, was granted free agency at the conclusion of the season.
Unable to find a Major League job for the 2007 season, he signed on to play for the Long Island Ducks in the independent Atlantic League, joining a team that included Pete Rose, Jr. and former Major League All-Stars Carl Everett and Edgardo Alfonso.  Offerman enjoyed a resurgent season feasting on minor league pitching, posting a .335/.425/.502 line with 8 home runs through 69 games.
On August 14, 2007, Offerman was in the lead-off spot for the Ducks, who were visiting the Bridgeport Bluefish of Connecticut.  Offerman promptly hit Matt Beech’s first pitch of the game over the wall for a home run.  Offerman then came to the plate again in the second inning.  After a swinging strike, Beech’s next pitch plunked Offerman on his left calf.  Instead of taking first base, however, Offerman charged the mound with his bat in hand.
As Beech stood his ground, Bluefish catcher Johnathan Nathans chased Offerman towards the middle of the infield and was allegedly struck in the head by Offerman’s bat.  Offerman was ejected from the game and arrested later that night on two counts of Assault in the Second Degree.  He was suspended by the league and never played for the Ducks again.  Offerman was placed on two years probation and the criminal charges were ultimately dismissed.
Nathans, who had played as high as AA ball in the Red Sox organization several years earlier, tried to stay in the game but was ultimately removed from the game and taken for medical care.

In his lawsuit, Nathans claimed that Offerman and the Long Island Ducks were guilty of (1) assault and battery, (2) negligence, and (3) reckless assault and battery.  Nathans alleged a number of resulting injuries from the attack, including a concussion, post-concussion syndrome, vertigo, headaches, vestibular dysfunction, inner ear damage and post traumatic stress disorder, among others.

The Ducks filed a motion for summary judgment asking that the court dismiss them as a defendant because Offerman’s conduct was outside of the scope and course of his employment with the team; Offerman could not be held responsible for the injuries because Nathans was a co-participant in a contact sport; and, that even if held liable for the acts of Offerman, the Ducks could not be held responsible for punitive damages.

With regard to the assertion that Offerman was not within the course and scope of his employment, the court denied the motion, holding that “[a] master does not escape liability merely because his servant loses his temper while he is conducting his master’s business.”  The court believed it was “not unexpected for a batter to charge the mound after being hit by a pitch.”  While it was “unusual” for the batter to bring along the bat, but not unprecedented, this act was not such a clear-cut digression from his work duties that the court could dismiss the case.  They felt it was a better question for the jury to answer.

As to the co-participant theory, the court granted the motion as to the negligence counts because mere negligence was not enough under Connecticut law to create liability between co-participants in a team contact sport.  However, liability could be lie with reckless or intentional conduct; therefore, the motion was denied as to the assault and battery counts.

Finally, the court found that the Ducks could not be found responsible for any punitive damages assessed on the part of their employee Offerman.

This case proceeded to trial and the jury was tasked with determining whether Johnathan Nathans had proven that Jose Offerman committed an assault and/or committed a battery upon which damages could be awarded to Nathans.  Additionally, the jury was asked whether Offerman’s conduct was committed within the course and scope of his employment with the ball club.

Ultimately, the jury found that Offerman had assaulted Nathans but that Nathans had not proven a battery.  They awarded Nathans a total of $940,000 in damages.

The jury additionally found that Offerman was not acting in the course and scope of his employment at the time of the occurrence and in doing so, exonerated the Long Island Ducks of any wrongdoing.

Both Nathans and Offerman have filed post-trial motions asking the court for a new trial.

Nathans believes the jury incorrectly found that Offerman was not in the course of his employment at the time of the incident and that the trial court failed to give the jury proper instructions on the agency relationship.

Offerman asks for a new trial due to the inconsistencies in the jury’s findings and verdict.  He argues that because he was not found to be responsible for the battery, which requires actual physical contact, he should not be responsible for damages that clearly had to have resulted from being struck by the bat.  [Being found responsible for the assault would only require that Nathans was put in a reasonable fear of harm from an Offerman attack and no actual physical contact would be necessary to award damages.]  Also, Offerman asked that the court to find that he was acting in the course and scope of his employment, such that the Ducks would share in the responsibility of payment of the verdict.

Updates will be posted when the court rules on these post-trial notions.

What about Jonathan Nathans since the attack?

Nathans never returned to professional baseball and instead pursued a law degree.  He is currently a practicing attorney in Maine.

What about Jose Offerman since the attack?

Offerman played two more seasons in the Mexican League before retiring as a player.  As the manager in the Dominican Republic Winter League, Offerman got into a heated discussion with the umpires during a game on January 16, 2010.  He punched one of the umpires and as a result was banned from the league for life.

The lifetime ban was eventually overturned and he has since managed again in the Dominican winter league and for the Veracruz Red Eagles in the Mexican League.